The Business of Buoy Lines

Over the past couple of months, GOMLF has been working with the Maine Department of Marine Resources (DMR) on the issue of "vertical lines."  For those in the know, a vertical line is the line that runs from a buoy down to a trap, and is also variously called a buoy line, endline, or main warp.  According to the timeline set out by the Atlantic Large Whale Take Reduction Team (TRT), there will be a regulation intended to reduce the risk of entanglement in endlines by 2014, and the DMR has two projects that will help inform the State's proposal to the TRT.  GOMLF is assisting with the field work component of both projects.

How many endlines are there, anyway?

A buoy survey has been underway since last fall, where observers on lobster boats run tracklines up and down the coast in state-controlled waters outside the whale exemption area.  These "sliver waters" are areas where lobstermen fishing multiple traps to a buoy must use sinking groundline in order to comply with the federal whale regulations.  DMR is using a buoy survey to assess the number of vertical lines in the sliver waters.  A GPS unit is attached to a laptop, giving the location of each counted buoy and associated endline over a full year.


Counting buoys is NOT rocket science, but it does involve a great deal of caffeine.  Every month since last August, I have sat on the back deck of a boat, generally in passable weather (though some of the winter months were iffy), with a laptop on my lap, hitting F1-Enter each time I see a buoy within 100 yards off the port side. 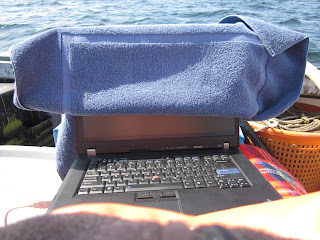 And if that weren't exciting enough, there are some times of the year where an entire trackline, often 10 miles or longer, will have only 5 buoys along its length, because fishing effort is elsewhere -- say, 20 miles offshore, or tight along the shoreline, depending on the season.  Let's just say this is some of the toughest field work I have ever been involved with -- important as it is, it's so hard to stay awake!  I joke with the captains about bringing a cribbage board along, but in reality, he has to stay alert and on the trackline, and I have to peel my eyelids back and remember to hit F1-Enter each time I see a buoy inside 100 yards.  We really can't do much else while we're "on effort", so my challenge has been, Hmm, how do I stay awake, alert, and in focus during this lulling boat ride?

Well, I take pictures, of pretty boats and coastlines:


I have also been known to write draft reports for our derelict fishing gear grant, or to compose a letter to my sister.  (I can touch type, so it's easy to watch for buoys as I tap away without looking at the keyboard, a handy skill when the keyboard's covered by a towel to keep the spray from hitting it).  I also sing.  A couple of the captains have XM radio and play the '80s channels, so I know a lot of the songs.  (Yes, I am that old!) I must say I'm glad the roar of the diesel running at 15 knots drowns out any of my croaking so the cap doesn't have to suffer through it.

Speaking of which, earplugs are a must for me on these trips.  I am amazed by the fact that most lobstermen I know do NOT wear hearing protection, shrugging it off and saying, "My hearing's gone already," and chalking it up to an occupational hazard.  I was kind of impressed the other day when I saw a young captain in Cape Porpoise hop out of his pick-up at 6am, whistling a rock-n-roll tune, wearing noise-cancelling headphones on his temple.  Nice to see some preventive maintenance.

The best part of this project is the mornings -- early mornings on the coast of Maine are without peer.


Maine lobstermen are great co-workers, and I'm glad the DMR has contracted with GOMLF to do the buoy survey, despite the arduous effort it requires to stay awake.

Another project we're working on is the Trawling-Up Experiment.

In this effort, the DMR has designed a project to get at the question, "What would happen if lobstermen currently fishing their traps as singles or pairs were made to trawl up their gear in order to reduce the number of vertical lines?"  If you've been following the whale rules at all, you know that one of the possible regulations will be to reduce the number of buoy lines to reduce the risk of entanglement to whales.

So we found a few lobstermen in zones C & D to try it on for size -- take 50 of your traps and rig them in longer trawls of 3, 5, 7 and 10 traps, and then compare the effort, catch and gear loss to a comparison set of 50 normally rigged pairs or single traps.  They have to keep a logbook, so I went out with them on their first haul-back to answer any questions that might come up as they log the info.

F/V TOPCHOP of Criehaven and F/V SHANNON ROSE took me out this week on their first haul-back of the experimental trawls, and it went about as smoothly as one could have hoped.  There have been no storms, so the gear pulled up as nice as you please, despite being rigged as trawls with sinking groundline and set on hard (rocky) bottom.  A couple of traps were hung down for Capt. Mike, but he did a great job of freeing the gear without losing any traps.

For boats used to fishing singles or pairs of traps, having this many traps on the rail is very much an experiment, and the lobstermen we're working with are very curious to see how it will all play out over the next several months.

Collaborators-are-us, and it's been a great few months of getting out with various boats along this incredibly beautiful coastline.  Thanks to all the participating lobstermen, and thanks to DMR for including us in these projects.  I might do another blog after all is said and done, and the State has a proposal ready for the TRT in January.  All this data ought to help!
Posted by GOMLF at 6:55 AM 1 comment:

Last week, I manned the winch to off-load traps in a thunderstorm, rain pelting down, standing on a piece of broken rubber mat and thinking how silly it was to be heisting traps during a lightning show.  The fishermen working to grapple back gear in Zone E had been out in it all morning, as is par for their course.

Today, in Zone B, it is sleeting, hailing, thundering with lightning, and blowing easterly -- and there are at least three fishing vessels out there hauling back ghost gear for the team.

Now I ask you -- how is a fisherman different from a mailman?  He may not deliver letters, but does indeed deliver.  As the captain of F/V Scorpio's Lady said this morning, "we're lobstermen -- a little easterly doesn't bother." 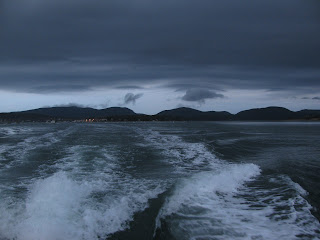 Traps, Trash or Treasure: It's all a matter of perspective

The Gulf of Maine Lobster Foundation has been busy this month.  So have about 40 fishermen that we've enlisted to drag for lost traps on the ocean floor. 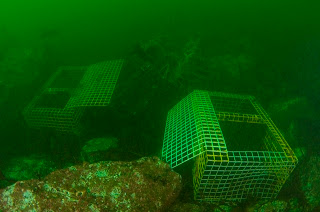 A diver friend, Steve Karpiak, took this photo when he was out doing surveys for another company, and he loaned it to us for demonstration of the situation -- these are "ghost" traps whose door panels have been opened, which effectively disables the trap from fishing. 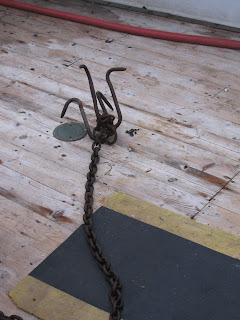 The fishing vessels, up to ten in each area we're working, use a grapple to drag along the bottom and snag up the traps, or rope, or fishing cable, or batteries, or mooring blocks, or barge hausers . . . or any manner of debris.  There are many different grapple designs, but most consist of heavy steel components (chain link, bar, rod, hooks) with prongs or spurs which catch onto the gear. 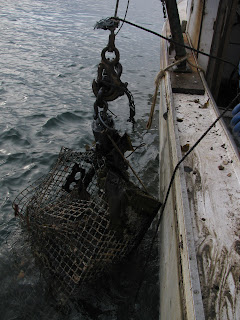 All of the gear and debris is brought in to a centralized wharf, and we process it all -- we keep the traps that look even remotely "fishable" and try to contact the owners to retrieve them, and we send all the scrap traps to the metal recycling company.  Rope and other debris is sent to a waste-to-energy facility in Portland (ecoMaine), where it gets burned to create electricity.  In fact, over 10 tons of waste have been sent there through this program so far. 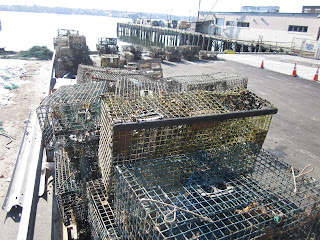 The fishermen involved in the project are paid a small stipend to cover their fuel costs and not much else -- for the most part, they're committed to the idea of helping create a better habitat for their livelihoods, and they are often very curious about the science of the project.

The Maine Department of Marine Resources is partnering with us on this work, and their lobster scientists are looking at how the biodegradable escape panels are operating on these "ghost" traps.  Each captain keeps a log of the trap's ID, age, by-catch and escape panel status, and all that data can be mined to tell a story.  Through this small project, we should also be able to get a sense of what's out there for lost gear -- whether it's trash or treasure.
Posted by GOMLF at 8:02 AM 1 comment:

See Us at the Maine Fishermen's Forum

The Gulf of Maine Lobster Foundation staff will be at the Maine Fishermen's Forum in Rockport next week, March 3rd, 4th and 5th.  Please stop by and see us!
Posted by GOMLF at 7:09 PM 1 comment:

GOMLF
Gulf of Maine Lobster Foundation, a 501(c)(3) non-profit organization, collaborates with lobstermen, scientists and members of the community to:
-Support a healthy lobster fishery within the Gulf of Maine
-Conduct vessel-based field work
-Protect and sustain the resource
-Encourage good stewardship of the marine environment
-Provide outreach, education and economic opportunities.